Landfills are often misunderstood. Read more about the history, process and function of the modern landfill. 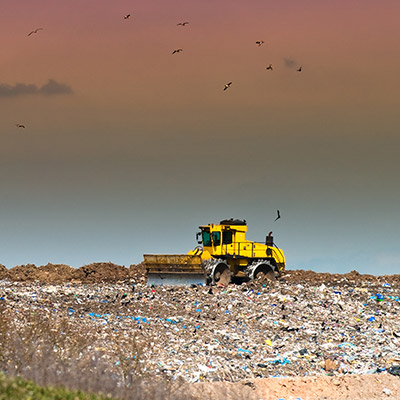 What is the world's largest man-made structure? No, it is not the pyramids of Egypt. The C.N. Tower is not the answer either. The largest structure built by mankind is the Fresh Kills Sanitary Landfill. Located in Staten Island, New York, the site is 45 meters high, 45 meters deep and covers an area of 120 hectares!

This would seem surprising at first but is less shocking upon looking at some statistics. In Ontario, approximately 70% of all waste is sent to landfill. If this figure was representative of Canada as a whole, 22,500,000 tonnes of garbage would be buried every year. Piled on a football field, 1.2 meters in depth, it would require 6,000 fields to hold all the waste. Placed end to end, the fields would stretch from most of the homes in the Bluewater Recycling Association's service area to Toronto, four times.

Modern landfills, are well-engineered homes for waste that cannot be reclaimed by stages higher up the waste management hierarchy. Landfills are often misunderstood. While it is obvious we rely upon them too heavily and they are necessary as a last resort, much of the negative feelings towards landfills stems from the past. The forerunner of a landfill was the dump. Webster's Dictionary refers to the verb "dump" as "to get rid of" and this is exactly what happened. Garbage was disposed of on any cheap and convenient piece of land; waste was dumped into the ground. Pest control, litter, soil, and water contamination were not of any real concern. People began to associate dumps with rats, seagulls, poor drinking water, and foul smells. Gradually these problems were rectified, resulting in the creation of landfills. In the past, dumps took all wastes; industrial, commercial, and hazardous household materials. Landfills are now designed and regulated to hold specific materials. This has led to the creation of three general types of landfills: sanitary landfill, secured landfill, and monofill.

All landfills must have some level of engineering, both for the protection of the environment and for aesthetic reasons. The specific protection required is determined on a case-by-case basis; each landfill is judged individually based on the waste it is to contain and the geographical properties of the area. The degree of engineering depends upon the landfill's ability to meet the M.O.E.'s groundwater contamination and discharge limits.

Gas and leachate are the two major problems landfills generate. Landfill gas is roughly 50% carbon dioxide and 50% methane. It is the methane that poses the greatest danger; the gas becomes explosive when mixed with oxygen. Without proper control, methane can seep into pipes and buildings. Homes built near old, improperly constructed landfills have exploded from methane leaks. 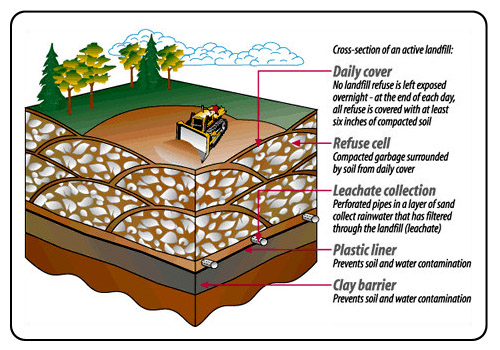 Leachate starts as rain or other precipitation. Upon falling on a landfill, or flowing past as surface water, the moisture passes down into the landfill. As water moves through the waste, metal, soluble chemicals, suspended particles and other contaminants are gathered by the liquid. Unless measures are taken, these pollutants end up in the groundwater and bodies of surface water (lakes, rivers). In general, the Ministry prefers sites that have a high degree of natural protection against environmental damage. So, what makes a sanitary landfill so special? Let us start from the bottom, and work out way up. For illustration purposes we will use a model that requires a layer of bedrock or compacted soil. Preferably, this base would be a clay soil. Clays have physical properties which inhibit the movement of water. This is useful in a landfill, as the water percolating through the waste can carry contaminants into groundwater supplies. Rolls of synthetic, impermeable membrane liner are placed on top of the soil/bedrock. When sealed together, the rolls form a large "bowl". Again, this protection is used to limit the flow of leachate out of the landfill. Immediately about the liner is a layer of sand or gravel and the leachate collection system. Liquids that cannot penetrate the liner accumulate in the sand/gravel. A network of pipes buried in this material allow leachate to be drawn up and out of the landfill. The liquid removed is treated as sewage, to allow for its safe disposal. Lying on top of the leachate recovery layer is a bed of clay. As mentioned, the clay is helpful in controlling the downward movement of liquid. Another synthetic membrane bowl is placed over this clay later, then a second leachate collection system in a bed of sand/gravel. Groundwater monitoring wells and methane gas monitoring equipment are inserted into the landfill before waste is added. Water samples are taken, while the site is empty, as a benchmark of groundwater quality; future samples will be measured against the initial sample. Now the landfill is ready to accept waste. Refuse is placed in a small working area called cells. Layers of garbage are compacted using heavy equipment, such as a packer tractor, in a cell before being covered with soil at the end of each day. Daily cover keeps odours, pests, contamination and litter to a minimum. When a sufficient number of cells have been completed a layer of soil called intermediate cover is added. This allows the landfill workers and their equipment to start on another series of working areas. Once enough layers of cells have been filled, to complete the landfill's capacity, a top cover is placed above the last row of cells to seal the site. Grading of the cover and ditches controls surface water run-off. Beams and trees are used to make the perimeter of the landfill visually appealing. Fences and locked gates ensure illegal dumping or mishaps are avoided during non-operating hours. Many landfills, today, refuse to accept material that can be recycled. Others do not take commercial/building/demolition waste. The materials accepted by the site depends upon what the M.O.E. has licensed; the Ministry establishes what each facility s allowed to receive. In the case of hazardous waste, a secured landfill is the only type of landfill legally allowed to take this material.